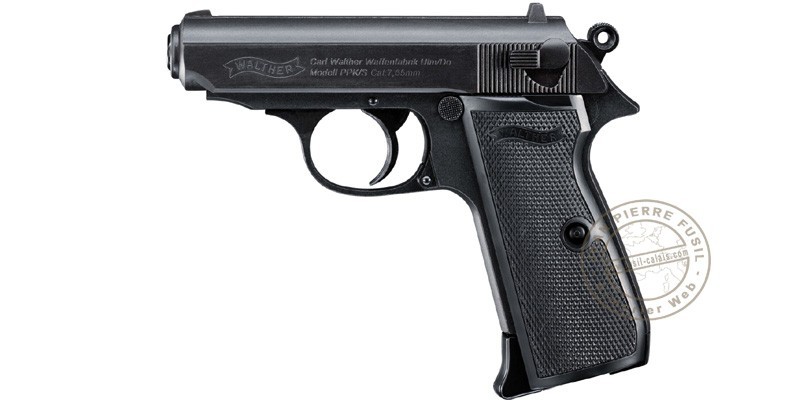 Compact version in the series of the Walther PP (Polizipistole) pistols, the PPK/S (Kriminal / Special) model was developped in 1968, to be imported in the US as sport pistol.
It is especially known as James Bond's pistol in many movies, as Skyfall, or also Austin Power's.
Umarex delivers here a grea air replica, blowback , ery realistic with all Walther's makings.

The Walther PPK/S airgun is a semi automatic pistol, shooting spherical pellets (BBs),  powered by a CO2 cartridge.
Full metal, it is made of alloy, with a smooth steel barrel.
This pistol has the blow-back system, meaning that during the shooting, the slide goes backward and comes back in position, allowing an automatic reloading. That gives the replica hyper realism for visual effect, and also gives grat sensation in hand.
The grips are made of reistant synhtetic, and are finely squared, to be firmly handled.
To help the aiming, it has fixed front and rear sights, that have to be aligned with the target's center.
It also has a manual safety button, that is recommended to engage while handling the pistol, to avoid accidental shots.

As most of the CO2 handguns, the air cartridge takes place in the handle : jus remove the left grip, insert the CO2 cartridge, and pierce it, screwing under the handle, thanks to tha Allen key provided.
The magazine comes down pressing the magazine holder button. Once removed, just load the BBs one by one from the top, and insert it back.
The trigger is sigle action system, it is thus necessary to cock the gun before the first shooting, pulling the slide back and releasing it, or pulling the hammer.
Once the pistol loaded and cocked, remove the safety, aim and shoot!