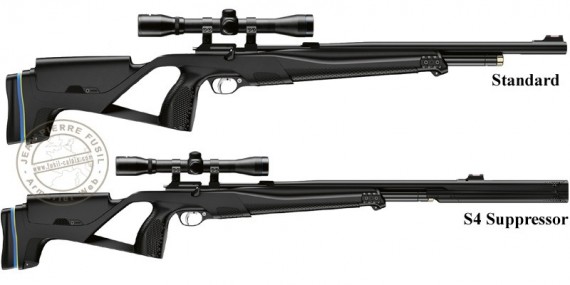 It is available in 2 versions: standard or S4 Suppressor.

Characteristics of the PCP Stoeger rifle

With the XM1 rifle, Stoeger, a subsidiary of the Beretta Group, enters the era (or air ?) of PCP (pre-compressed air).
It therefore works thanks to a "tank" previously filled with air by means of a pump or a bottle. The filling pressure is 200 bar / 2900 Psi, a pressure gauge is built into the rifle.

Of calibre 4,5 mm, shooting diabolo shots, the rifle XM1 develops a power of 19,9 Joules, it is thus in category D, it is enough to be 18 years old to acquire it.
It can be used either in single shot, or in manual repetition, with a rotary charger of 9 shots.

The arming is carried out thanks to a lever located on the right of the rifle, which will come to engage the lead in the barrel.

The trigger is adjustable, and the safety system is manual.

The XM1 is equipped with natural fibre optic sighting devices and an 11 mm sighting rail. It also has 2 lateral Picatiny rails, on which a bipod can be mounted.

The stock is made of synthetic material

Human Tech Design : a combination of technical inspiration and the innovative vision of industrial designers, combined with interactive studies with the user, making it possible to offer weapons that are perfectly suited to shooters

Pro Adaptive Checkering : Progressive grid pattern on many surfaces of the grip for optimum comfort in all circumstances

Multi Grip System : possibility to replace the handle, but also for the XM1, the support plays.
The rifle is delivered with 2 grips (standard and XL), and 2 cheek rests (standard and raised).

The Stoeger XM1 rifle is available in 2 versions :

Before handling, make sure that the rifle is unloaded and engage the safety lock.

Caution : fire immediately after arming, as rearming would introduce a second pellet into the barrel (in the case of use with a barrel), with the risk of plugging it.