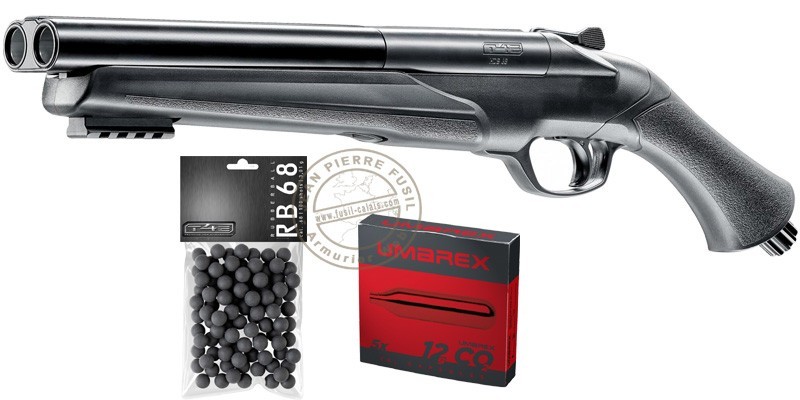 Delivered in pack with 5 CO2 cartridges and 100 rubber balls.

Presented this month, march 2019, during the professional show IWA, the HDS 68 (Home Defense Shotgun) is the third model of CO2 rubber balls from Umarex, with its T4E brand.

With its short double barrel and its pistol handle, the HDS 68 has an impressive visula Hyper realistic.
In caliber .68 (1733 mm), this marker, shotgun type works thanks to a 12g CO2 cartridge, and can shoot 2 balls, individually or simultaneously, with 16 Joule power.
It is mainly made with polymer, a material light and resistant, and with alloy mechanical pieces.
Handle and forearm are textured, to ensure an optimum prehension in any circumstances, even when hands are wet (due to the stress for example).
The trigger is "doubled", with a security lever, avoiding uncontrolled shots (in case the gun is falling).
On the top, is the selector lever, allowing to choose the barrel that is going ot shoot (or both).
Under the barrel is a Picatiny rail, that can accept a laser sight or a tactical lamp.

The HDS 68 has the quick piercing CO2 Emergency magazine, as on the HDR 50 : to pierce the cartridge, and put the gun under pressure, ready to use, it is necessary to tap under the "button".
This system has the advanteage to let you prepare the gun in advance, without using the joints prematurely (crushed by the pressure of the CO2)

The CO2 cartridge takes place in the handle, head down, unscrewing the cork located on the tail.
Just tap then on this buton, before begining the shooting session, to percuss the cartridge;
When the rifle is under pressure, a little pin comes out on the top of thebarrel.

The ammos have to be put in the barrel, which is simply opened pressing the button under the barrel.

According to the use purposed, leisure or defense, the HDS 68 can shoot various ammos :

The HDS 68 is delivered with :

Thank you.Looks very good and very solid.Dont try yet because dont have gaz.Tell you later.

I received today the Umarex
Thanks for the fast shipping
Looks real nice !!

Verry well maid gun and fires v,well it is a good buy It is well worth the money THANKS MEL