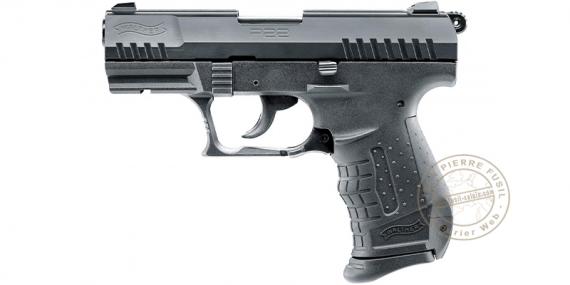 Especially designed for those who want a fast and effective defense weapon... always ready for action, here’s the P22 Ready!

Based on the Walther P22 gun, this replica manufactured by Umarex takes the design and the main features, with some characteristics, such as the lack of manual safety, a thinner slide and a reduced weight, making a pistol easily and quickly usable.
In 9 mm PAK caliber, it can fire blank, gas or flash ammunition, as well as flares or rubber balls, with the appropriate adapters (not supplied), with its threaded barrel (M8).

Manufactured by Umarex, under Walther license, this P22 Ready is a blank firing gun, in 9 mm PAK caliber, ideal for home self-defense.

Its specificity comes mainly from its compactness, with:

As the original, it has of a polymer frame, in order to minimize its weight, and an alloy mobile slide.
Its stock is textured, and the handle back rubberized, allowing a perfect grip in any circumstance, even in case of stress!
The slide is also grooved, to facilitate its handling during cocking.
The hammer, as well as the bolt stop, are functional.
It is equipped with fixed sights (front and rear), as well as a short Picatiny rail under the barrel, on which you can adapt a laser for example.
It has a magazine with a capacity of 7 rounds, with an ambidextrous stop, under the trigger guard.

Release the magazine, by pressing the magazine catch under the trigger guard (be careful not to let it fall).
Insert ammunition : 9 mm PAK, blank, CS gas or pepper, flash, it is quite possible to mix them.
Reinsert the charger.
Cock the pistol, with the bolt or the hammer, to bring the first cartridge into the chamber

The gun is ready to fire, just pull the trigger to shoot.
It works semi-automatically : with each shot, the used cartridge ejects, leaving chamber for the next one, then ready to go.

Once the last round is fired, the bolt stays behind. Then put back a full charger, and unlock the bolt by pressing the side stop, to let it back forward.

The P22 Ready Walther is delivered in a carrying / storage case (zippers and foam interior), with a cleaning swab and a multilingual manual.
(no flare launcher)