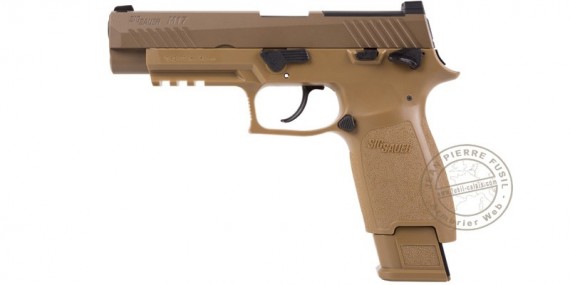 Winner of the XM Modular Handgun System (MHS) competition, to be the new handgun for the US Army, ths Sig Sauer M17 was then presented in a civilian version, and in an airgun version nowdays, allowing everyone to feel like an US Army soldier!
Available in caliber .177 pellets (4,5 mm), working with CO2, the M7 ASP has a Coyotte Tan finish, a colour tha is merging with the desert shades (frequent theater of military operation).

The Sig Sauer M17 ASP, in .177 rifled bore, is intended to be a true replica of the original, in its dimension, use and also disassembly (dame as the 9mm pistol).
The frame is made of polymer, a material giving lightness to the pistol (but with an excellent solidity).
The slide is ful lmetal and blowback : it moves back while shooting, cocking the pistol automatically.
It has a long all-in-one magazine, xith the CO2 cartridge housing, and the 20 pellets rotatry magazine (belt-fed).
It also has the exclusive cam lever CO2 loading, piercing the CO2 cartridge easily.
It has a manual safety, with lever, ambidextrous.
The natural sights, front and rear, are fixed with white popints. A Picatiny rail is also present, under the barrel, where to adapt a tactical lamp, a laser sight...

Before any handling, engage the safety, to avoid any accident.
Remove the magazine easily, pressing the release button.

Put the filled magazine in the handle. The pistol is ready to shoot.