The practice of rifle shooting can be accompanied by the use of several types of accessories. Most of them are used to improve shooting accuracy, others are used for comfort, gunner protection, maintenance and transport of the rifle.

Accessories to improve your accuracy

• The scope is used to improve the accuracy of the shot. It is mounted directly on the rifle barrel using a rail system. It works by projecting a reticle in front of the shooter's eye and magnifying the target by 3 to 16 times its original size. The magnification can be variable and modulated according to the shooting distance, or fixed and used only when you know the distance between the target and your position.

The majority of shooting glasses are only used when the light is good. Some can be equipped with a light reticle that allows shooting even when the brightness is at its lowest.

• The red dot laser indicates the location of the impact with a light point. It also attaches to the barrel of the rifle. Unlike the firing scope, it does not magnify the target but points a red beam at it. Highly visible, it can be used even in low light conditions. The laser facilitates aiming and shooting accuracy. Once the center of the target is blocked, the shooter only has to pull the trigger to reach it.

• The red dot viewfinder has almost the same characteristics as the laser, except that instead of pointing the beam directly at the target, it projects it onto its window. The shooter just has to look through the lens, block the center of the target and shoot.

Accessories to improve your comfort of use

• The bipod is chosen according to the model of the rifle. It is used to shoot in a lying position and allows precise shooting without risk of movement. It is particularly used to hold heavy rifles. 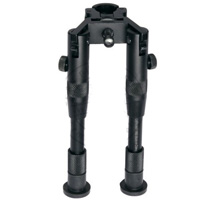 ASG bipod to be fixed on the barrel
Adaptable up to 19.5 mm diameter
Telescopic model with rubber feet
"Bipod fast and easy to install. Good workmanship, efficient, he does his job well." Laurent, customer Jean Pierre Fusil

• The barrel is only used on CO2 and PCP rifles. It takes the form of a circle with 8 or 10 holes. Inside each of these holes, seals are manually placed by the shooter. To avoid recharging it each time it is empty, it is possible to use one or more additional barrels. As soon as the barrel is empty, you can replace it and continue firing without interruption.

• The loader equips the tactical CO2 and PCP rifles. It takes the form of a circle with 8 or 10 holes. Inside each of these holes, seals are manually placed by the shooter. To avoid recharging it each time it is empty, it is possible to use one or more additional barrels. So as soon as the cylinder is empty, you replace it and you can continue to fire without interruption.

• The loader equips the tactical CO2 and PCP rifles. It takes the form of a rectangular body that is attached in front of or behind the trigger. The seals are also added manually by the shooter. Like the additional barrel, it allows the rifle to be reloaded more quickly and fired in a burst. The absorption pad is only used on rifles equipped with a firing scope. It is mounted directly on its rails and prevents the bezel from being out of adjustment.

• The pad minimizes the recoil of the bezel foot between each shot. The user saves time since he no longer has to replace the bezel.

Accessories to transport your pellet gun

The cases are essential to transport the rifle safely.

• The sheath takes the form of a long foam pouch covered with nylon. It is chosen according to the length of the pellet gun. It has a strap and handles that allow it to be carried to the shooting range, by shoulder or by hand. It opens and closes with a zipper.

• The case is more discreet than the sheath. Even if it is the same length, it is impossible to imagine what it contains. Its interior is made of foam with pins that hold the pellet rifle in place. To access its contents, four hooks must be unlocked. The case being more discreet, it is regularly used to transport the rifle by plane. 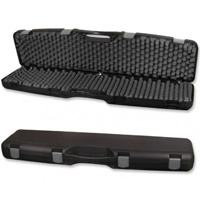 Megaline briefcase
For 122 cm rifle
4-point locking and metal hinges
The best-selling case on the armory!

Accessories to ensure your safety and that of others

• The simplest hearing protection is in the form of polyurethane foam earplugs that fit the ear profile (the same as yellow earplugs for sleeping or working on the site). They are for single use only and are suitable for occasional shooters.

• For more regular shooters, there are reusable synthetic caps. When they are not slipped into the ears, they are held around the neck with a cord. No need to keep them in your hand when you want to talk to your colleagues about shooting! For the enemies of traffic jams, it is possible to use an earmuff that covers all ears. It takes the form of a classic headset, except that instead of listening to music, it reduces the sound of gunfire.

• If you intend to train in a club, you must wear protective glasses. Even if accidents are rare, they protect the eyes from a possible lead bounce. Glasses with yellow lenses improve visibility and allow shooting even in bad weather conditions (too much sun, light rain or fog). For people who wear glasses, it is possible to put on overglasses with adjustable temples, and thus to see the target correctly.

• If you have children at home, the trigger guard lock is MANDATORY! It is attached to the trigger of the rifle and is locked with a key or a three-digit code. Once installed, it is impossible to unlock and pull it. 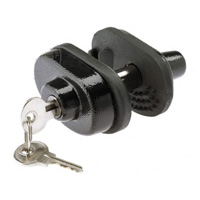 Keyed trigger guard lock
Delivered with a set of 2 keys

• Spare parts are mainly used to replace worn or damaged parts. Contrary to what one might think, the ease of obtaining the part does not necessarily depend on the brand awareness of the pellet gun. It results from the possibility, willingness and speed of the manufacturer to supply the part. At Jean Pierre Fusil, we contact the manufacturer directly to send you the part to be replaced as soon as possible. Delivery times depend on its stock and reactivity. As soon as we receive it, we will send it to you! Feel free to contact us if you want to replace a part of your rifle.

• In addition to the parts to replace a damaged element, there are also parts to accessorize the weapon. The vast majority of sight glasses are supplied with mounting claws that allow them to be attached to the barrel of the rifle. When they are delivered without, you have to buy more:

• fixing clamps, taking into account the diameter of the bezel body,

• mounting claws that adapt to the width of the barrel rail.

Accessories to maintain your rifle

The pellet rifle requires very little maintenance. As it is loaded with lead pellets and not black powder, it takes many shots to get residue in the barrel. It is only from 2000 to 5000 shot pellets that you should think about cleaning the inside of the weapon with brass rods and stamps. Cleaning kits containing all the necessary equipment are available on the online armoury. Practical! 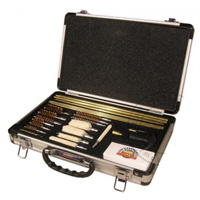 • Shooters who have acid perspiration can cause rust on some external parts made of steel. To remove it, brush them with 4.0 steel wool and then coat them with oil and dry them with a cloth.

• Shooters who want to pamper their rifle can always apply gun oil to the entire weapon (butt, barrel, trigger, etc.) and wipe it with a cloth. It will be as good as new!

For more than 40 years, we have been helping you choose your pellet rifle and accessories. Contact us on 03 21 34 30 47 ! We will help you choose the right accessory!