Although pellet rifle shooting requires little equipment, it still requires pellets, targets and gas refills (for CO2 and PCP rifles) to be able to fire.

In France, it is the leads 4.5 mm that are most used. In air rifles, they are placed one by one in the stock or arming lever. In CO2 or PCP rifles, 8 or 10 seals are directly placed in the barrel.

• The classic leadings are perfect for recreational shooting. They are lightweight and weigh about 0.50 grams. They are used by shooters who train on cardboard, plastic targets and cans. They are sold in boxes of 100 to 500 and are cheaper than the others.

• The plombs shooting school are intended for sports shooting. They are specially designed for competition and are better finished than traditional lead seals. These are more expensive pellets used to load competition rifles used in shooting clubs.

• The heavier leads can weigh up to 1.2 grams. They can be used to charge weapons over 15 joules. Heavier, they pierce the target more easily without being sent further.

Conventional and heavier lead seals are available in several shapes. They are chosen according to the target and the expected effects. The striped skirt and the pointed head are elements that improve the penetration of the seals into the air. 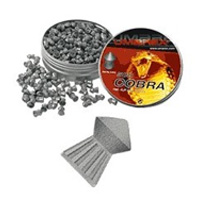 Lead 0.50 g with striped skirt and pointed head
Effective, precise and well perforating
"Nothing resists it, neither cans nor soda cans" Abel, customer Jean Pierre Fusil
The best selling lead on the online armoury !
Available in packs of 2 boxes of 500 lead 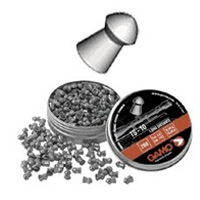 Ammunition made of alloy and lead-free alloy can also be used to load the rifle. They break down faster and are more environmentally friendly. Just as effective as traditional lead seals, they are intended for people who care about the environment.

Advice: If you already have a 4.5 mm pistol or revolver, you can also load it with conventional weights or shooting school. Heavier weights are unusable on handguns. Some are even too long to get into the barrel.

Note: The balls are reserved for handguns (revolvers and pistols).

• The CO2 rifle is powered by a compressed gas cylinder located in the butt or magazine. The most common cylinder weighs 12 grams and allows you to shoot 60 times in a row, knowing that from 40 shots onwards the accuracy of the shot decreases. The CO2 cartridge is for single use only. When it is empty, it must be changed before it can be removed. 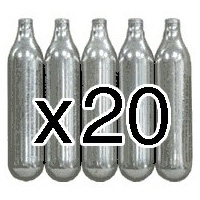 The CO2 bottle 12 grams per batch of 20 is the most ordered
Batches of 5 and 50 bottles also available
The 20: a good alternative, neither too much nor too little!

The set of 20 CO2 cylinders

Advice: The bottle is used entirely during the shooting session. If there is CO2 left inside and the weapon is not used, the cylinder will empty itself.

• The PCP rifle is powered by pre-compressed air that is stored in a tank underneath its barrel. The tank also allows for continuous shooting. Even if the number of shots depends on its size, it is generally possible to carry out 40 to 70 shots. When the storage chamber is empty, it must be recharged with a scuba tank, high-pressure compressor or hand pump.

Targets are recommended for training in the garden. Although it is possible to do this on cans or other objects, it is safer to shoot at real targets.

• The square cardboard target is the most classic. It measures 14 x 14 centimetres and is fixed on a suitable target holder. This is the standard version used in clubs and shooting schools. It is used to improve accuracy over more or less distant distances.

• There are targets that are more fun specially designed for having fun in the garden. Some will turn when the blow hits, others will move from right to left and others will project coloured liquid when they are touched. Something to remind you of shooting at the fair or in the saloons of the American West! 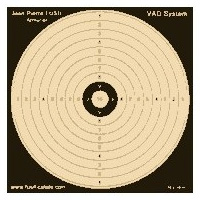 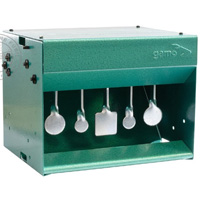 Target to be hung on the wall or placed on a support
4 retractable moving targets
1 central rearmament target
Lead receptacle
" The combination of a reactive targeting with a remote reset in addition to a bullet trap" Benoit, customer Jean Pierre Fusil
The most controlled target on armory !

Tip: Targets are made of metal or cardboard. It is recommended to protect them in case of bad weather.

Note:: It is also possible to download and print more unusual targets like a zombie, Darth Vador or other movie characters (when will the target manufactured with a 3D printer?).