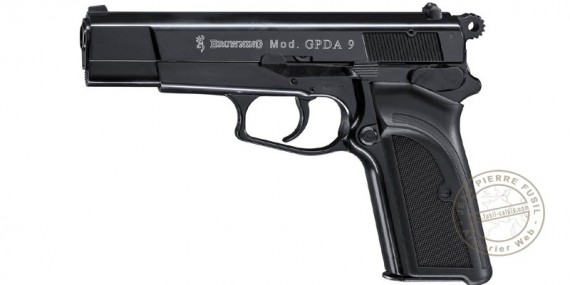 Great replica of the Browning GPDA model, made in Germany by Umarex : its reliability and authenticity are sure.
Its weight and dimension are respected, and its working is really close to the real one.
This pistol shoots blank, flash or gas ammos, and is delivered in a plastic case with a cleaning brush and a flere laucher.
This self defense pistol is available with 4 different finish :

Made by the belgian firm FN Herstal, the Brownong GPDA appeared in 1983.
Modernised version of the famous Hi-Power, also named GP-35, its trigger guard was re-deisigned, to allow a 2 hands shooting.
Umarex offers here a great blank firing replica, in 9mm PAK bore, for personal protection, at home.

Made in Germany, the frame and the slide made of alloy give it a very realistic weight at handle, and a good resistance.
The Browning logo is marled on the slide.
the magazine catch, the slide sto and the hammer decocking lever are functional.
The pistol has natural sights : fixed front and rear sights.
The handle is made of squared synthetic, non slip.

The pistol can shoot blank (bang), flash (bang and glaring flash) or gas (bang and jet of an incapacitating gas at a high speed).
With a special adapter (not provided), it is also possible to shoot a Self Gomm rubber ball.

Press the magazine catch to remove it from the pistol, and load the cartridges (max. capacity : 9 cartridges). You can mix the different ammos blank, gas or flash.
Once the magazine inserted, pull back the slide , to transport the first cartridge to the barrel. The empty cartridges are automatically ajacted, allowing the next one to come in the barrelµ.
The trigger can be used in signle or double action : pull the trigger directly, or cock the hammer previously by pulling it back.

The Browning GPDA is availalble in :