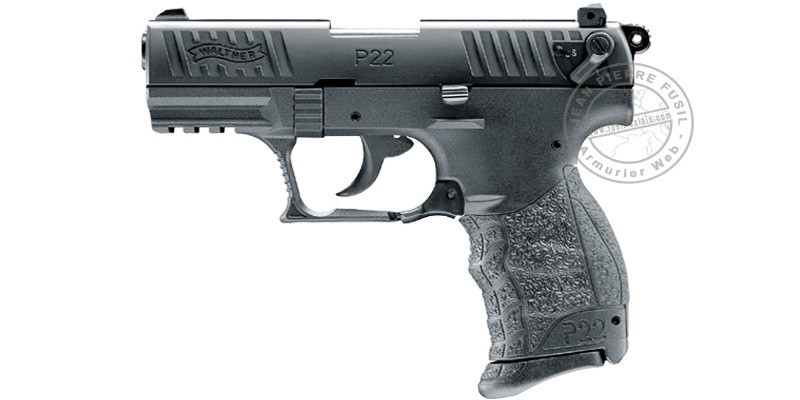 The P22Q pistol is an upgraded version of the famous P22 : a new weaver mount rail, that enables to put optics accessories; ambidextrous safety catch and magazine release lever(usable by both side); an ergonomic "hi-grip" handle and slide serrations assuring an optimal handling and using.

Made by Umarex, in Germany, this 9mm blank bore replica is available in various colours : black, chess, mintos or tweety.

Replica of the Walther P22Q, originally in 22LR bore, this blank firing pistol extremely realistic is perfect for the defense of your residence (and its ocupiers!)
In 9mm blank bore, it allows to shoot blank ammos, whose bang hearing suspiciousely as a real one (... to put intruders off!).
You can also use gas ammos, that throw at a high speed an irritating solution, as tear gas.
Its threaded barrel allows to screw a flare launcher or a sefl gomm adapter, to shoot a flare or a rubber bullet.
It is automatic, cartridges eject automatically.

Datas :
As the original P22, this replica has a polymer frame, that gives it lightness and handiness, and an alloy slide, very strong.
The safety lever is ambidextrous.
The magazine catch, to remove it, is located on the trigger guard.
The takedown lever and the slide catch lever are also functional.
The trigger can be used in single or double action : you can pre-cock the hammer with the finger, or pull the trigger directly.
It ergonomic handle has the "Hi-grip" (non slip).
The front and rear sights are fixed.
A Picatiny rail under the barrel allows to mount a small laser or tactical torch.

Use :
Before any action, make sure to put the safety, pressint the lever down.
Load the magazine, with 9mm PAK cartridges (you can mix blank, gas and flash ones).
Once the magazine inserted, pul back the slideand allow it to spring forward, to load the pistol.It is now ready to shoot!
Put the safety off, and shoot.
after the last round has been fired, the slide catch holds the slide in the open position.

Delivery :
It is delivered in a plastic transport case, with a fireworks adapter and a small cleaning brush.