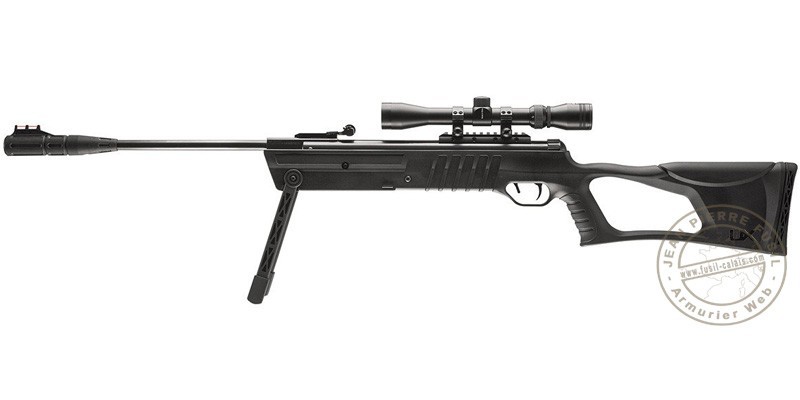 With this UX FUEL pellet rifle, Umarex goes off (its) beaten track, with a very sniper model, with a less traditional design, with its skeletonized stock, and its SilencAir sound-reducing barrel sleeve. What's more, it is equipped with ReAxis technology (gas piston), bringing power, precision and silence.

It is delivered with a 4x32 scope and folding bipod.

This product is no longer in stock

With the success of the Black Ops, and other sniper rifles, Umarex had to react... it's done, with this FUEL GP rifle, equipped with the last technological advances of the German brand, with a very convincing aesthetics !

The Umarex Fuel pellet rifle is equipped with the latest technological innovations :

Characteristics of the pellet rifle

Of calibre 4.5 mm, it fires diabolo pellets at a speed of approximately 280 m/s, i.e. a power of 19.9 Joules, thus classifying it in the category of weapons on sale over the age of 18.

Its synthetic thumbhole stock has a grooved grip and handguard, for a better grip in all conditions. It ends with a rubberized plate, for improved comfort and cushioning on the shoulder.

Its particularity is its thinness : it is rather flat with a short busk (top of the stock) (barely 3 cm high), whereas other rifles are more rounded.

As far as aiming is concerned, the Fuel has an adjustable micrometric sight and a handlebar, both with fibre optic light.

It also has a Picatiny rail for the addition of sighting aids.

It is also equipped with an integrated bipod, which folds down along the stock.

Its safety is automatic, and engages as soon as the barrel is opened. It can be easily removed with the tip of a finger, as it is located just in front of the trigger.

Handling of the air rifle

A good rifle at cheap price