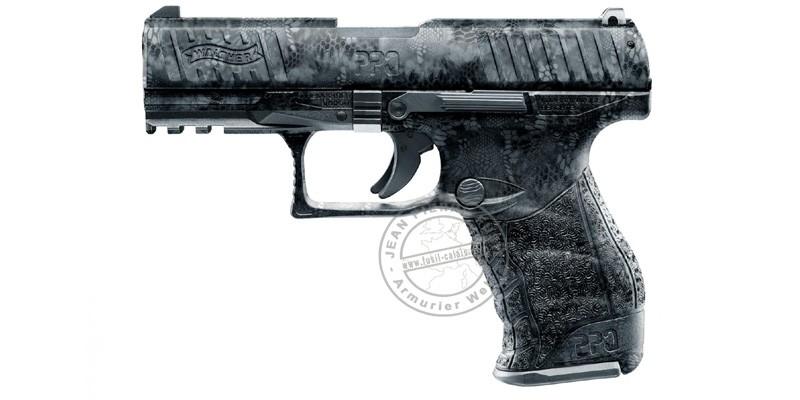 Replacing the famous Walther P99, the Walther PPQ originally constructed for special forces, has also conquered the civilian marrket, thanks to an improved design and a reinforced reliability.
This replica, made by Umarex, respects it original, as much as the dimension, weight, material used and operating (automatic shooting, with ejection of the cartridge)
For the originality, this self defense pistol is proposed with a Kryptek Black finish, a modern camo design, reptile scales style, in black colour.

Automatic defense pistol, blank firing, replica of the Walthet PPQ M2.
Made by Umarex, under trade mark, in Germany.
Compatible with blank gaz or flash ammos, in 9mm PA caliber.
The 15 shots magazine simply removes pressing the release button located on the left.
As the original, its body is made of synthetic, and the slide of alloy.
The slide is mobile, and moves back at every shoot, ejecting the used cartidge. It remains open after the last cartridge.
The ergonomic stock is Hi-Grip, with structured surfaces, non slippery.
The trigger is single action, the hammer is pre-cocked, just pull the trigger to shoot.
It has fixed natural sights.
It has a Picatinny rail under the barrel, for mounting a laser or a tactical lamp.

It is presented with a Kryptek Black finishn a modern camo snake skin style.

This self-defense pistol is delivered in its plastic case, with a firework adapter and a cleaning brush