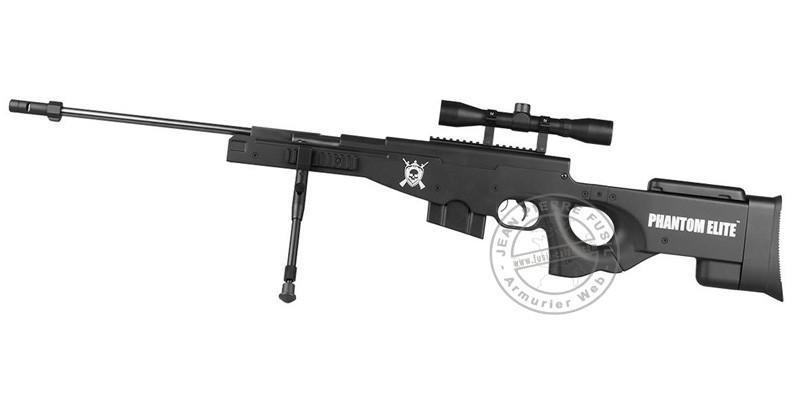 Beautiful replica of a sniper rifle, in .177 bore, this sair rifle will seduce military weapons lovers but also recreational shooters.
Based ont eh L115 rifle, used by the british army, this rifle produces a 19.9 Joule power, thanks to a gas piston, softer than the traditional spring.

This product is no longer in stock

As its colleague, the Black Ops Sniper Tactical, this Phantom Elite air rifle incorporates the codes of the weapons-mounted marksmanship, hilighted since a few years, by the video game Call of Duty, for example.
Its biggest pecularity : a synthetic stock called 'thumbhole", doubly adjustable :

Its rifled steel barrel  shoots pellets, in .177 caliber.
Its gaz piston system develops an energy of 19.9 Joule, perfect for shooting at 25/30 meters
The cocking is break barrel : pull the barrel down, after unlocking it (with a slap at its end), put the pellet in, and put it back up. The sleeve at the end of the barrel enables a better handling.
As the original L115A3 used by the british army, it dosen't have any natural sights, but has a Pivatiny rail, on which mounting the 4x32 scope delivered, or a red dot sight.
A bipod is also provided, that has simply to be adapted on the lateral Picatiny rails, helping the stability, by shooting with the rifle leant. These rails can also be used to mount any other tactical accessories as a lamp, a laser...